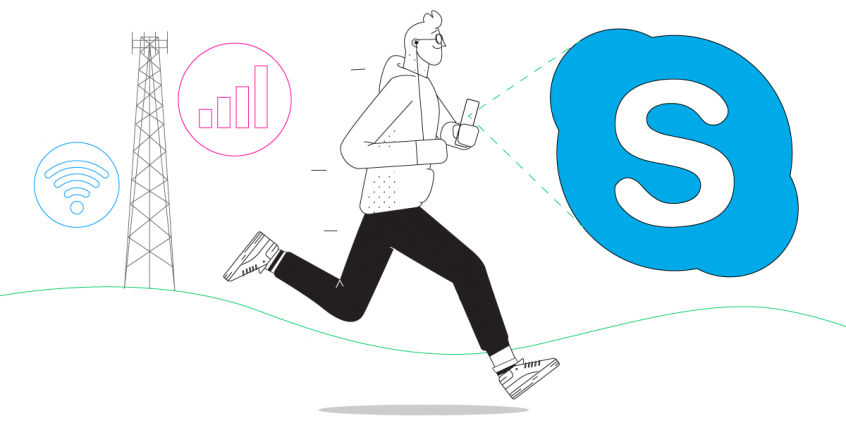 Who hasn’t used or heard of Skype yet? It’s a tool that allows the world to communicate. Millions of individuals and businesses use Skype to:

It is ever so valuable in times when people work remotely, like the current Coronavirus outbreak.

The software app is available on all major platforms, including iOS. It’s a great app, when it works. But when it’s wonky and your calls drop or the video stream freezes – it’s going to be an issue!

There is an easy enough fix for Skype disconnecting on iPhone. Keep reading and we will shed more light on the causes and how to fix this.

Why Does My Skype Keep Disconnecting?

Skype video (and even audio) calls are extremely bandwidth-hungry and demand a lot from your Internet connection to work properly. So, when determining why Skype is disconnecting on iPhone, you should first look at your Internet connection. It might be that your Internet connection is too slow and doesn’t have enough bandwidth for a VoIP HD video call. Or the connection is flaky and you’re experiencing a lot of “packets loss.” Both of these issues are amplified when you are on the move, since iOS mobile devices can not easily transition between different Wi-Fi networks or cell towers without interrupting apps and dropping Internet VoIP calls, such as the ones on Skype.

How to Solve Skype Disconnecting on iPhone Issues Easily with Speedify

Speedify is a fast bonding VPN that changes the way your iPhone connects to the Internet. Instead of just using one connection, Speedify allows your iOS smartphone to connect to the Internet over both Wi-Fi and mobile data simultaneously. This instantly increases your connection bandwidth and reliability and provides a better and “disconnect-free” Skype experience. You will always have the best video quality on calls and don’t ever drop any calls.

Speedify also monitors the quality of your Internet connections. When it detects that you’re on a bad Wi-Fi network, it will automatically and seamlessly reroute the data through cellular data. Best of all, when the Wi-Fi is back online and reliable, it begins using it again – automatically and in the background. Say goodbye to Skype disconnecting on iPhone!

Get Both Speed AND Security with Speedify

In addition to delivering a faster Internet experience to your iPhone, Speedify uses advanced technology to encrypt all the data sent to and from your device. Speedify keeps you safe from compromised Wi-Fi networks, snooping ISPs, and other threats. It was also designed to have zero impact on your devices battery life.

Speedify is also smart enough to try and send as much data as possible through Wi-Fi instead of over more expensive mobile data connections – saving you from potential overage fees from your carrier! Plus – you’ll have the peace of mind that your company’s sensitive data will not get into the wrong hands when delivering presentations.

Using Skype can be tricky, to say the least, when you’re on the move or don’t have the “brightest” Internet connection. But Speedify has your back covered when it comes to Skype disconnecting on iPhone! Get it now!