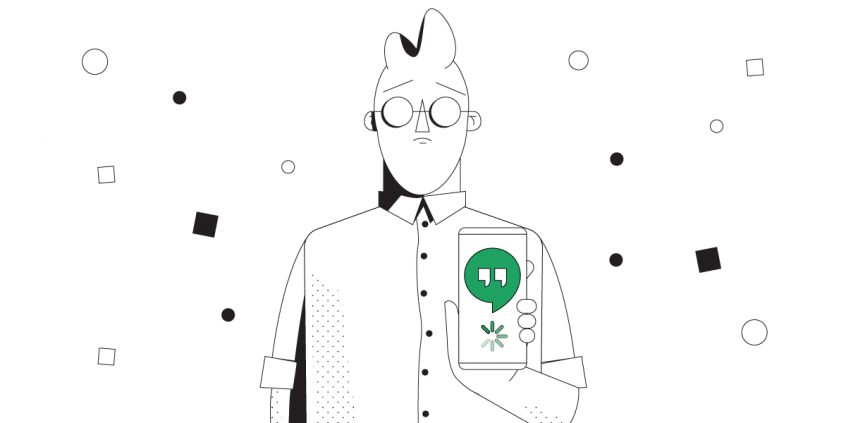 Is Google Hangouts slow when sending or receiving messages?

Ever try to send a message to a Google Hangout, only to have it take several minutes just to send? Have you ever sent a picture to a Google Hangout and been frustrated to see that once the picture was finally uploaded, it was just an unrecognizable blob of pixels?

If so, you are not alone. Many users are angry over slow Google Hangout connections. At least one user reported that one message didn’t go through to everyone in the hangout for nine days!

Dealing with streaming video and video chats can be even more of a nightmare. Conference calls are often interrupted when the video freezes or starts to get blocky and pixelated. Google Hangouts is designed to be a cool and useful communication tool, but it doesn’t do much good if it is too slow.

Do you have all these issues with Google Hangouts messages and calls? Keep on reading – we’ve got a quick and easy solution for you to fall in love again with this collaboration tool.

Why are Google Hangouts so slow?

Google Hangouts relies on your devices internet connection to send and receive messages. When your connection is compromised because of weak or fluctuating signal strength, it causes a frustratingly slow or laggy Google Hangouts session. Sometimes the problem can be caused by something as random as someone using the microwave, which operates on similar frequencies and can temporarily disrupt your wifi signal.

The solution to slow and laggy Google Hangouts

Speedify optimizes all of your device’s internet connections. Instead of just routing all your data through only your Wi-Fi signal or only through your mobile data connection, Speedify unlocks your device’s full capacity and uses both connections at the same time to send and receive data. This gives you a much faster Google Hangouts experience.

The Speedify app also features automatic failover. This means that if one of your connections drops out, Speedify will seamlessly reroute everything to go through your other working connection. This keeps you from experiencing any gaps or lag when using Google Hangouts. Instead, you get crisp video streaming and truly instant messaging. It also gives you the freedom to be move around without fear of accidentally losing your connection because of a dead spot in your signal coverage.

Get additional Speed, Safety, and Security with Speedify VPN

Speedify does more than just optimize your internet connections. It also works to keep you safe. When you are out on your mobile device you are often at the mercy of networks maintained by other people. Cyber security is becoming a bigger and bigger threat for mobile phone users. Poorly maintained Wi-Fi networks could put you and your data at risk from any number of threats.

Speedify used its industry leading VPN for mobility technology to protect your data from being intercepted and to keep hackers who have compromised a Wi-Fi network from gaining access to your passwords and other sensitive data. It also protects you from snooping ISPs that are looking forward to sell your data to advertising companies.

Speedify is committed to making sure you internet experience is fast, safe, and secure. We do not log any dataregarding your online activity.

It’s time to stop putting up with a slow Google Hangouts experience. You deserve to have a fast, safe connection that lets you get the most out of your device’s capabilities. Get started with Speedify for FREE today – no strings attached, no email sign-up necessary.