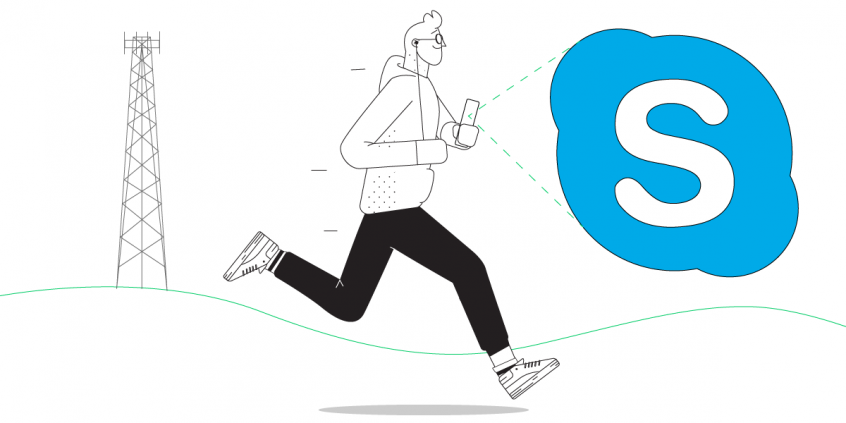 Who hasn’t at least heard of (if not used) Skype, the world’s most popular communication tool? Skype is definitely of the greatest innovations of the Internet era. It has completely transformed the way we do business and the way we talk to family and friends across the globe.

Using Skype can be frustrating at times. If you are able access and use the service, the video or audio will lag and you will miss important parts of the conversation. But there are situations where you need to unblock Skype first to access it.

Once you understand what is causing your issues, getting a fast and fully functional Skype is quick and easy. Keep on reading and we’ll guide you on how to choose the best VPN for Skype.

I’m Not Able to Access Skype; Why Is Skype Blocked?

The reason why Skype is blocked depends on who restricts it. Usually, on school or work networks, Skype may be restricted to conserve bandwidth. If we’re talking about countries and governments blocking VoIP apps, the reasons range from conserving bandwidth to limiting uncontrolled VoIP communication.

In this case, in order to unblock Skype, you’ll need to use a VPN service that encrypts traffic so that filters in place will not detect the VoIP traffic.

My Skype is Very Slow – Why?

Whether on your computer or smartphone, Skype is pretty hungry for bandwidth. If your Internet connection is slow, you will have a poor Skype experience. You need to find out what is causing your slow Internet connection. Some common causes are:

Many people don’t realize that using almost all VPN services will slow down your Internet connection. Many of these services will tell you on their website that using a VPN can slow you down anywhere from 5% to 30%. That is a big problem if you are trying to use Skype to communicate.

The reason traditional VPN services slow down your connection so much is that they are designed for security, but give no consideration to connection speed. Your data is being encrypted, but it is costing usability of apps like Skype.

Best VPN for Skype: Will You Choose Security over Speed?

As explained above, most VPNs will slow down your Skype experience. This puts users in a tough spot. Do you choose speed or security when it comes to the Internet? Nobody wants their sensitive communications to be vulnerable to hackers and snoops, but using a VPN can make having any kind of in depth conversation impossible.

The good news is you can unblock Skype with a VPN without having to choose between speed and security, with Speedify.

Speedify Is the Best VPN for Skype to Unblock It. Speedify Gets You Both Security and Speed.

Speedify is a fast bonding VPN that uses the latest encryption technology to provide cutting-edge security while also speeding up your Internet connection.

Speedify actively manages your desktop or mobile device’s Internet connections. It allows you to use multiple connections at once to connect to the Internet. You will be getting the connections’ combined speed and reliability. This improves your Skype experience instantly.

Speedify has a smart Internet auto failover mechanism so if one connection becomes unreliable or unavailable, Speedify will automatically shift all your Skype traffic through the remaining connection until the troubled connection can be restored.

Speedify is the best VPN for Skype, whether you need to unblock Skype or just speed it up. It’s the best way to experience quality Skype calls without putting your data in danger. Get started with Speedify NOW for free – no strings attached, no email sign-up necessary!