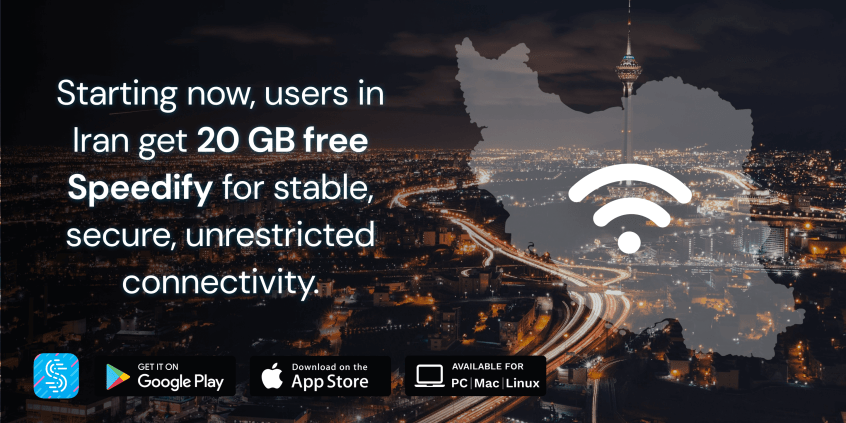 In the last few weeks, we have received an outpouring of requests from Speedify and non-Speedify users in Iran to help with their internet connectivity issues. Today we answer that call…

Speedify is the only VPN that can combine multiple internet sources into one bonded super-connection for more stable and secure Internet connectivity, including video calling, live streaming and web browsing. This means people in Iran are able to use the combined bandwidth of their cellular and broadband connections at the same time, fixing their Internet connectivity and security issues.

At Speedify we believe in a free and open Internet for all. Access to the Internet should be considered a basic human right and as such we have made the decision to help the people of Iran access the Internet without any disruptions. As of today all new and existing Speedify users in Iran will receive 20GB of free data for the next two months.

What Is Causing the Internet Issues in Iran

The recent “Hijab Protest Movement” for women’s rights in Iran has generated significant social unrest and authorities have taken harsh actions against the widening protests by clamping down on Internet access. Netblocks, the global Internet monitoring organization, has reported Internet connectivity and censorship issues in Iran starting on September 19, 2022. Along with causing widespread Internet disruptions, authorities have also restricted access nationwide to communication services and social platforms like WhatsApp, Instagram and others.

Amir Rashidi, director of Miaan Group, was recently interviewed by CNN, and mentioned that Iranian officials are following a familiar playbook:

If you are in Iran and want to access your free 20GB Speedify monthly data, here's what you have to do:

If you are already running Speedify in Iran, you just have to open the app and you'll see the increased amount of free data. You should also get a notification in the app confirming this.