One of our  goals at Speedify is to improve the user experience with each new release. If you’ve already upgraded to Speedify 3, you probably noticed that the Dashboard has been totally redesigned and now includes a real-time graph that shows your various Internet connections at work. The Speedify graph is designed to give you information about the speed of each connection as well as the combined total throughput at a glance. Each solid line corresponds to the Internet connection with a similarly colored circle in the Adapters table below the graph. Even better, the translucent portion of the graph shows Speedify in action, using all of your available Internet connections for faster overall speeds. 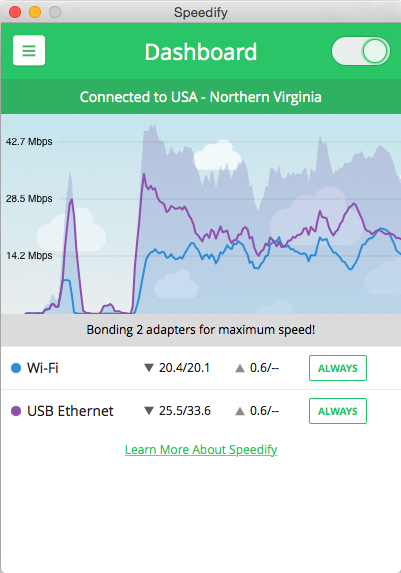 Now let’s take a look at the handy Adapters table below the graph. For each available Internet connection there are two pairs of numbers showing upload and download speeds respectively. From left to right, the two numbers represent the current amount of data being transferred, followed by the maximum speed of that connection in megabits per second (mbps). Note that Speedify doesn’t measure the speed until you send and receive a significant amount of data and will show only dashed lines “–” until the speed is determined.

The bottom-line is that the new Speedify dashboard should make it that much easier for you to see how Speedify is boosting your Internet speeds in real-time.

Don't Have Speedify Yet?