After several beta releases, we’re proud to announce that Speedify 3 is here. The new release reflects major changes to both the client software for Mac & PC as well as the worldwide server infrastructure that Speedify relies on. Current users will immediately notice key improvements to the user interface, including a new dashboard with real-time usage statistics and an awesome, new interactive server selection map.

By far the biggest change for new users is the introduction of the Speedify free tier. We’re excited for even more of you to finally see how Speedify can be a lifesaver, whether you’re at home, work, or on-the-road. Now, when you sign up for the Speedify free tier, you get 1 GB each and every month absolutely free. (2019 update: the free tier now includes 2 GB of data each month) That way you can see how Speedify fits into every aspect of your life before making the decision to upgrade. With the introduction of the free tier and the major new improvements for usability and stability in Speedify 3, there’s never been a better time to tell your friends and family to try Speedify for OS X & PC. 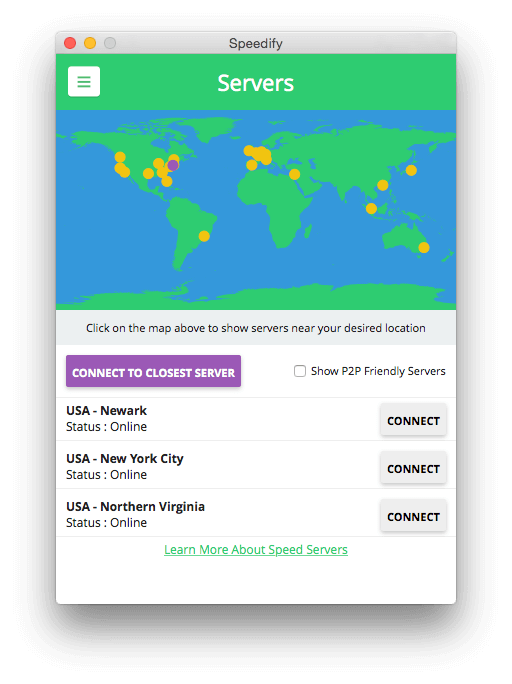 When you pick ‘Connect To Closest Server,’ Speedify 3 now picks servers faster, and no longer speed tests each Internet connection when it first connects. This lets Speedify connect faster and avoids using extra data. Instead, Speedify quickly discovers the speeds as soon as you start sending and receiving significant amounts of data. Each user has their own isolated software container on the Speed Server. This has a number of benefits, including improved security, stability, and resource allocation.

The all new Dashboard shows you a graph of what each of your adapters are doing. Each adapter gets a line on the chart of how much data it is currently sending and receiving. The colored fill on the graph represents the total data across all of your combined connections.

While you’re connected you should notice better speeds – in many situations Speedify is now up to 20% faster than it was in earlier releases: 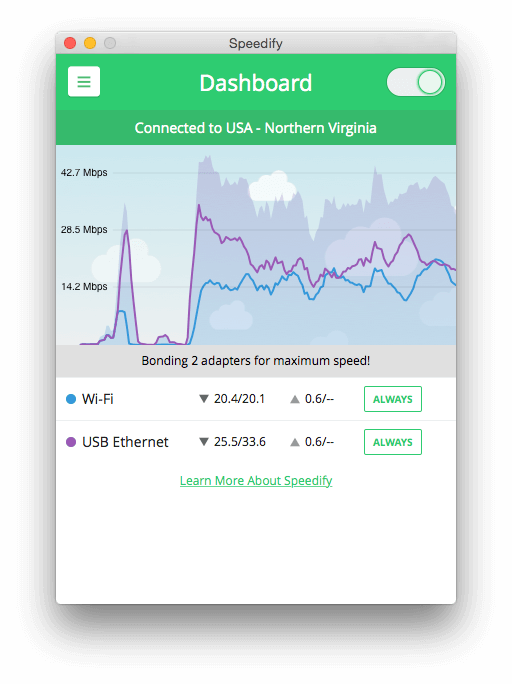 Because Speedify no longer tests speeds immediately upon connecting, it will not know the actual speeds of your connections until you transfer some real data. If you’re in a hurry to know, you can always visit, speedtest.net to run a quick speed test, giving Speedify enough information to get accurate speeds on each connection.

If you’re new to the service, Speedify’s ‘Getting Started’ guide now appears across the bottom of the screen to get you up-and-running:

Note that the option to use ‘Redundant Mode’ is no longer right on the ‘Dashboard.’ It can now be found on the ‘Settings’ screen in the menu.

The old “Network Settings” screen is now called the ‘Adapters’ menu. It shows each active adapter’s current IP address, data usage in the last month, and now supports ‘Usage Limits.’ You can set a monthly limit on each Adapter, and set which day of the month it resets on. For devices that have a monthly data cap, this can help you prevent accidentally going over your limit. Note that the limit only applies to data sent and received via Speedify. 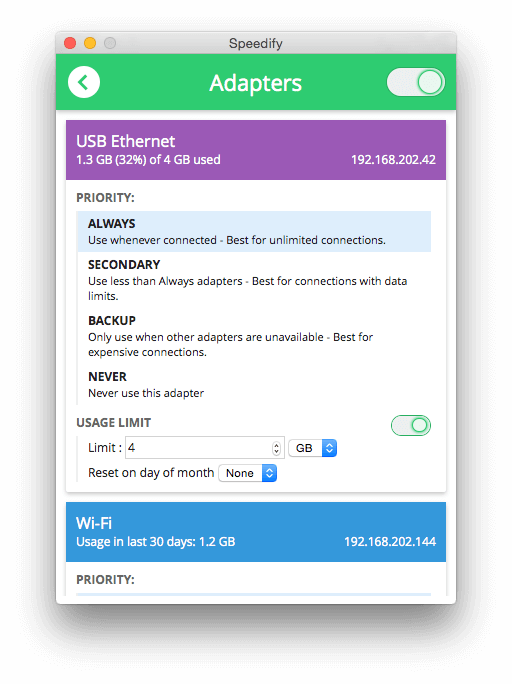 The Advanced View is back and better than ever! Multiple graphs let you explore bandwidth, latency, and loss. 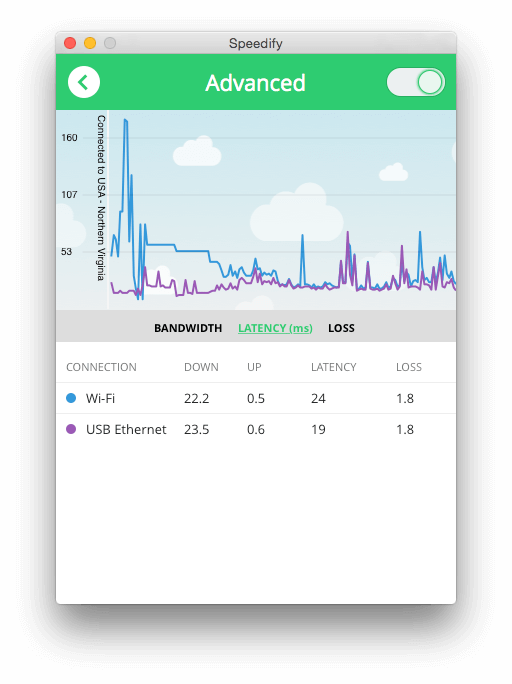 All of the options around your account and support have be consolidated into the new ‘Account/Help’ screen. Options for Support, Generate Logs, and Software Version Number can be found there.