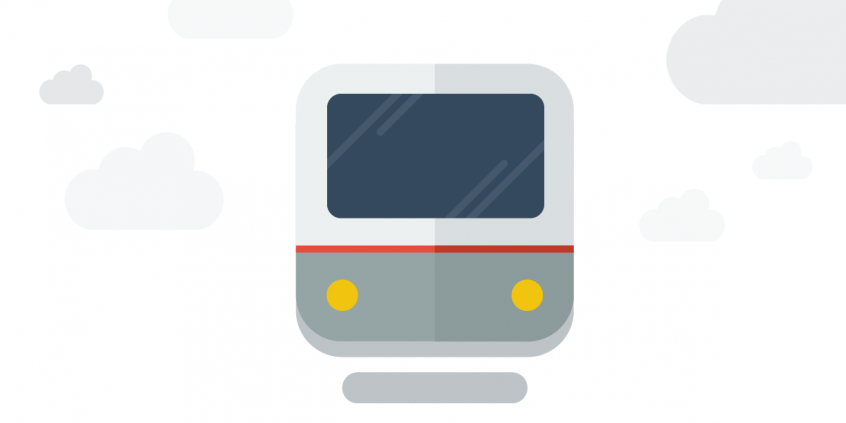 Many users have asked us if Speedify can improve their Amtrak commute. Here in the Northeast, most Amtrak trains do have complimentary WiFi. Unfortunately, the connection is often unreliable. There’s nothing worse than losing work because you’ve lost Internet access. Connectivity is even worse during peak hours, when more commuters are sharing the free WiFi.

Amtrak even warns riders that high-bandwidth activities like streaming music and movies isn’t supported on their WiFi network. But the reality is that many train travelers have problems getting any work done at all. Email and other basic web apps need a consistent 2 Mbps of bandwidth to run smoothly.

How often is Amtrak meeting that baseline standard? Is your LTE card or tethered phone performing any better?

To understand the Amtrak WiFi experience, I grabbed a couple network cards and jumped on the Amtrak route from New York City to Philadelphia and ran some tests.

I brought along my laptop and three Internet connections:

In Penn Station, NY, none of the cards were able to connect. As expected, I didn’t have a signal until we made it out of the tunnel on the New Jersey side. For the rest of the trip, my laptop ran a speed test every two minutes to check the connectivity and bandwidth of the various links. Here’s a birds-eye view of how each Internet connection performed on my journey:

The CLEAR card could only stay connected about half of the time. It’s not a great option on the train, so I’m ignoring it for the rest of this discussion.

Next we look at how the Verizon 4G LTE card and the Amtrak WiFi performance lined up:

As you’d expect, both connections were jumping all over the place as my train darted towards Philadelphia. Sometimes the Verizon LTE card was pretty fast, while Amtrak’s WiFi slowed to a crawl. At other times, my 4G card disconnected, but the WiFi was still chugging along. The bigger picture is that at least one of the two networks had a working connection the whole way down to Philadelphia. Sure, both connections frequently failed, but they never failed at the same time.

Speedify is our service that lets you combine Internet connections for speed and reliability.

Amtrak riders want to stay online with a connection reliable enough to get some work done. This is where Speedify comes in: our cloud service gives users the power to bond two or more Internet connections. With Speedify bonding the Amtrak WiFi and Verizon LTE, I never lost connectivity (that’s 100% uptime, folks).  I even had at least 2 Mbps throughput for 85% of the trip.

This chart plots the speeds of the Verizon, Amtrak and combined connections.  Because we want to see places where the speed is LESS than 2 Mbps, I capped all the speeds at 2Mbps, so the failures will be clearer: 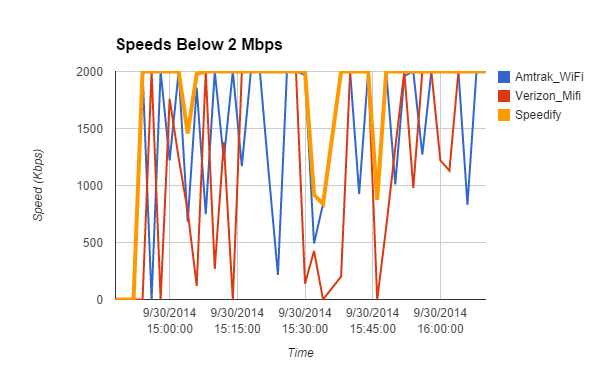 Despite their recent upgrades, this data shows that Amtrak still has a way to go in providing solid connectivity for their train customers. But with Speedify, you will have no trouble getting emails out, or putting the finishing touches on that presentation during your morning commute.