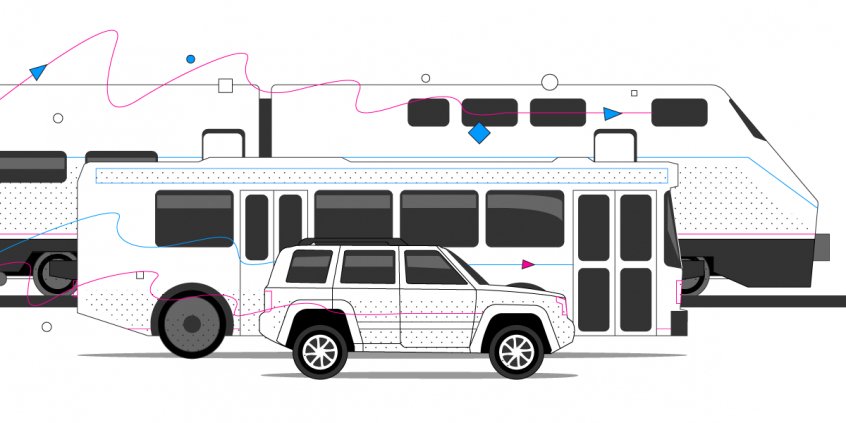 Fixing the free wifi on Megabus so you can actually get stuff done.

Megabus is one of the most cost effective ways to travel between major cities. It also offers travelers free Wi-Fi. But, like many free Wi-Fi offers, Megabus Wi-Fi is notoriously slow. But, now there is a way to make travel on Megabus even better. Speedify can solve your slow Megabus Wi-Fi issues.

Why is the Megabus wifi so slow?

Have you ever tried to drink a thick milkshake through a straw? No matter how hard you suck, you can’t get anything out of the straw. Something similar can happen with Megabus Wi-Fi. There is so much mobile internet traffic that almost everyone gets stuck waiting for their data to download or upload.

Most of the time people on a Megabus route are trying to run data-intensive tasks like streaming a movie or using Facetime. This makes the Wi-Fi even slower. Speedify solves this problem by giving you an extra internet connection.

iOS and Android devices typically only use one internet connection at a time. They connect via Wi-Fi or the devices cell signal. Speedify unlocks the full potential of your mobile device and allows you to connect to the internet through both the Wi-Fi and cellular connections simultaneously. This improves the speed and quality of your internet connection.

However, Speedify does much more than simply open up more internet connections. When you download the Speedify app, you are getting the world’s premier mobile VPN service. Speedify runs in the background of your phone monitoring signal strength.

It first tries to route as much traffic as practical through the cheaper Wi-Fi connection, only sending data over cell when it detects a fluctuation in the quality of the Wi-Fi connection. The app has an auto failover feature. It manages all of the connections without you having to do anything. You enjoy a smooth, uninterrupted internet connection allowing you to watch a video or connect to the office without any issues.

Speedify is also designed to have no impact on your battery life.

How Speedify Solves the Security Issues of Open Wi-Fi

Because Speedify is a mobile VPN platform, in addition to boosting your Wi-Fi connection speed on a Megabus trip, it also keeps your data secure and can even unlock blocked websites and services. When running Speedify, all of the information sent and received from your device is encrypted protecting you from man-in-the-middle attacks and snooping hackers.

Speedify was created to make sure nobody ever has to choose between speed and security ever again. You get to access the internet on your terms.

Using Speedify With Your Laptop

Speedify is also available for Windows and macOS. By tehtering your mobile device to your laptop you can use both the Megabus wifi (when its working) and your phones mobile data connection for increased performance and seamless connectivity.

If you are going to travel Megabus, you owe it to yourself to download Speedify before you go. It will change the way you travel forever.

But thats not all, Speedify can also fix flaky wifi on Bolt Bus and Amtrak!