Twitch is the go-to platform when it comes to streaming your gaming sessions. Or your real life – IRL streaming. Almost anything, for that matter. And what’s most important when streaming something to your viewers? Yes – the quality of the stream. And by quality I mean both the clarity and crispness of the images, but also the flow. You wouldn’t want to have crystal clear picture that is interrupted every few seconds.

Unfortunately the Internet is not always as you’d like it to be: fast and reliable. This causes serious problems for those streaming on Twitch: low quality and stuttering videos, buffering and disconnects. And of course we know that having a trouble-free stream is key to acquire new followers for your Twitch channel. So what can you do for that?

This results in the best quality of service you can get for Twitch with the Internet connections you have available.

But exactly how good is Streaming Mode? Is Speedify the answer to the question of how to improve Twitch stream quality? We decided to put it to test – and this article will show exactly what we got.

Testing on How to Improve Twitch Stream Quality. Is Speedify’s Streaming Mode Up for the Job?

Unless they’re having issues, we all know Twitch performs well when you’re backed by a fast and stable Internet. But what about the real world, where most likely you don’t get that luxury?

The testing procedure consists of 2 series of tests for Twitch streaming:

In terms of devices and operating systems, we tested it on an Android smartphone and a Windows PC. We combined Wi-Fi and cellular on the smartphone / Wi-Fi and the USB tethered phone connection on the PC.

First off – we have the test with no Speedify running. As you can imagine, once we get near the edge of Wi-Fi, the image starts stuttering. And finally buffering takes over until it actually disconnects the stream. Curiously enough, it doesn’t switch to cellular in due time to stop the broadcast from ending.

Video was very similar on both tested platforms – Windows and Android.

Next, we have testing on a Windows laptop. The video itself didn’t even stutter for one bit. Here’s how the bandwidth distribution looks like: 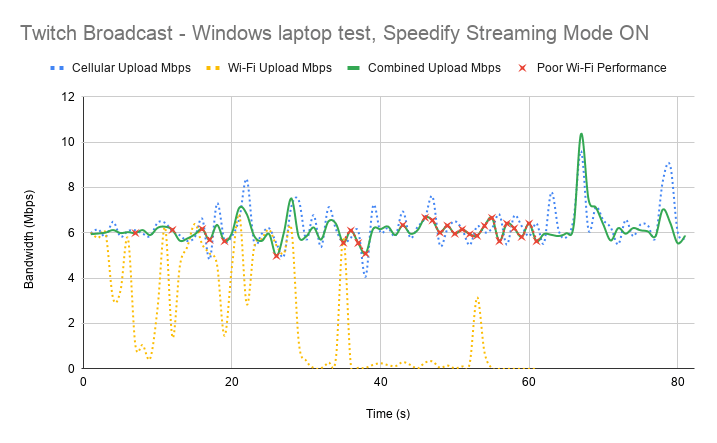 First of all, Speedify makes it possible to use both Wi-Fi and cellular at the same time. That’s why you see both connections being used together on the graph above. When Wi-Fi start failing, you notice that with the help of Speedify cellular takes over. The general bandwidth is constant at around 6 Mbps. And that steady streaming rate is good for Twitch and any streaming platform actually.

The Android test with Speedify Streaming Mode was similar to the Windows one – video was perfect in the sense that quality was good and it didn’t break. 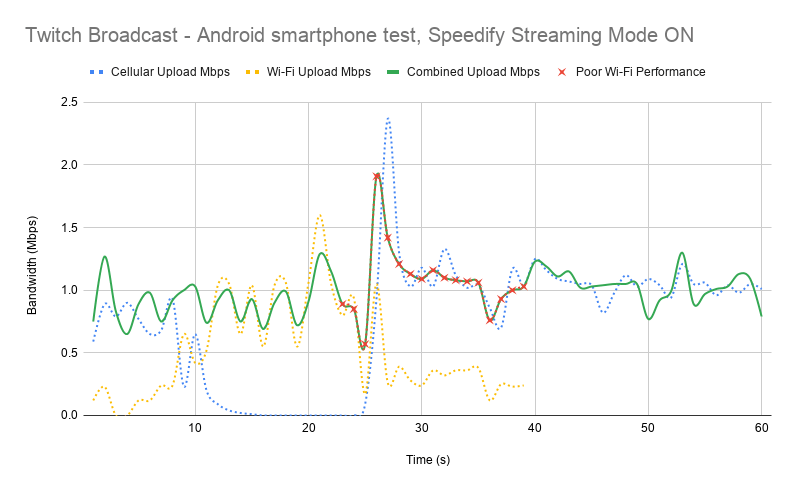 As you can see, when Wi-Fi is good and strong enough, cellular stops being used. However, cellular kicks back in as soon as Speedify detects that Wi-Fi is flaky. And again – notice the steady bandwidth around 1 Mbps that’s being preserved by Speedify. Again – the red x-es symbolize the high Wi-Fi packet loss rate.

We also sliced the test to analyze the bandwidth in 3 cases:

After looking at this table, we can conclude that Speedify was able to keep the average Twitch bandwidth on both Windows and Android in good range around the target bandwidth of 6 Mbps and 1 Mbps respectively. And this happened both in situations where the connections were good and when one of them went bad.

There you have it – when looking at how to improve Twitch stream quality, one of the must-haves is to use Speedify. Speedify’s Streaming Mode makes a huge difference for your Twitch streams.

If you’re still wondering how to improve Twitch streams quality – get Speedify!