Easiest Way to Share a VPN Connection on LAN Over Ethernet

Are you happy with the protection you get from your VPN service? Then you should think of extending that and protecting all your devices in your household. Most VPNs offer subscriptions that support multiple devices under the same account, but maybe you want to protect the online traffic going through devices that can only connect via ethernet, such as your SmartTV, older game consoles, other PCs on the home network, etc.

In this case, the simplest way to protect all devices is to share the VPN connection on LAN over ethernet so that all devices benefit from it. If you can’t afford a good router with VPN embedded (prices start at $100, not including the VPN subscription), then you can easily use your Windows laptop.

Read below how to share VPN on LAN over ethernet in 5 minutes or less, without complicated “Run as Administrator” and “cmd” Windows steps.

Here’s what you need to share your VPN connection on LAN over ethernet:

It’s time to get busy: 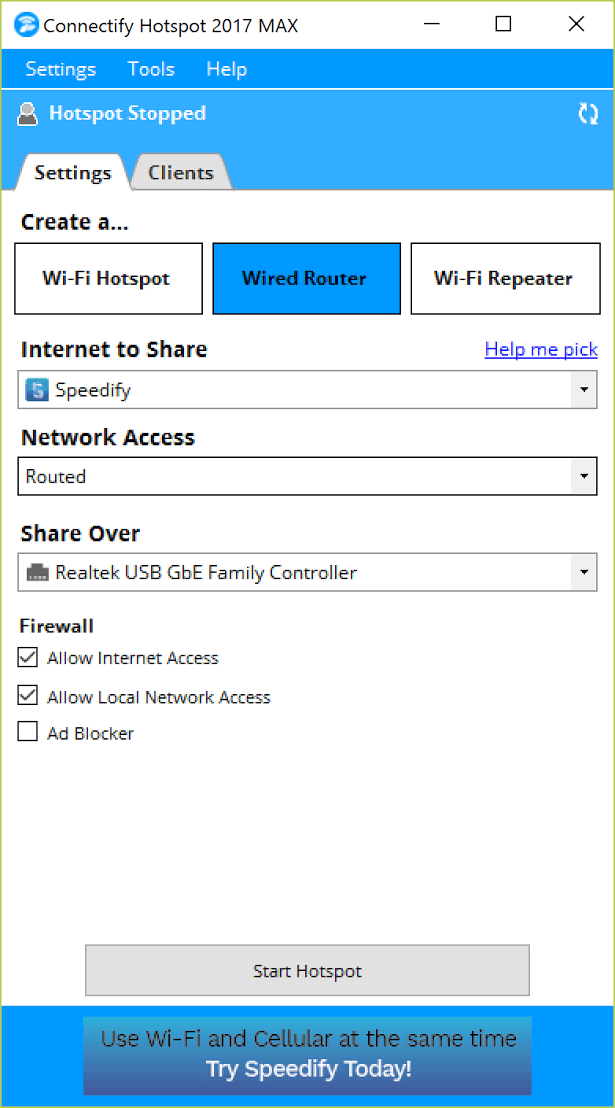 Outside of helping you share a VPN connection on LAN over ethernet easily, there are other perks of using Connectify as your virtual router app:

Speedify – Fast, Reliable and Secure VPN to Share on LAN over Ethernet

Using a VPN will protect you, but most of them will also slow down the Internet, as all data passes through their servers first before going to or from its final destination.

Speedify is a next generation mobile VPN built for speed and reliability that doesn’t slow down your online speed. Speedify uses a proprietary encryption algorithm that is fast and secure, to make sure you don’t compromise speed for security. This is very important when multiple devices will be using the same VPN connection.

It’s time you protect all traffic from your household with Speedify, a fast VPN built for speed, and Connectify Hotspot, a complete virtual router app. This way, you’ll be using the Internet on your own terms.

Speedify provides the speed, security and reliability as the best VPN to share over WiFi. Get started with Speedify now– no strings attached, no email sign-up necessary!