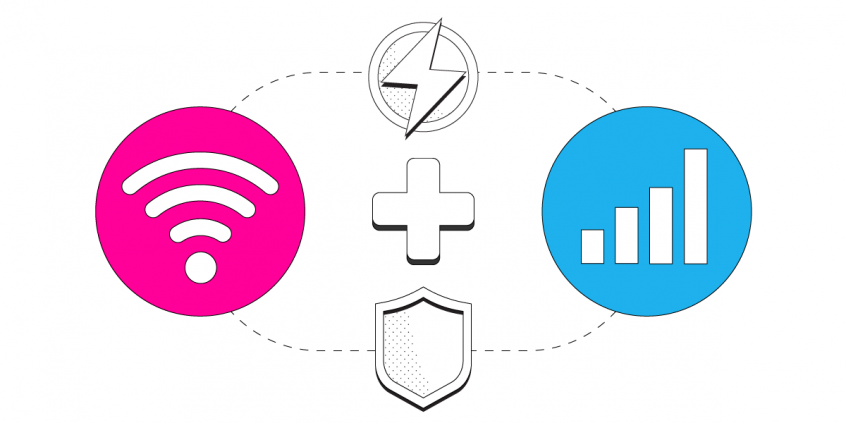 In purely theoretical situations, there’s no big difference 4G LTE and WiFi speed. Commercial versions specifications for both include top speeds of 1,000 Mbps. However, given the circumstances each of these is used, you can expect different performance.

The answer to the question: “WiFi vs mobile data speed: which is faster?” should be “using both at once!” But can you actually do that – combine WiFi and 4G LTE at the same time? See below how Speedify, a channel bonding app, helps you achieve this.

There are several key factors involved in the speed you will actually get from a WiFi or 4G LTE connection. Apart the obvious technology differences, when determining the actual connection speed, you have to look at:

For example, let’s assume a client commutes to work by bus. They can connect to the bus’ WiFi network, as can the other passengers. They can also use their 4G LTE connection. Given they will be on the move, their cellular connection will most likely be faster. That’s mainly because other passengers connect to the bus’ WiFi network and get a slice of the bandwidth.

WiFi Is Usually Faster than 4G LTE Mobile Data. However…

A recent OpenSignal study [PDF] proved that mobile networks are killing Wi-Fi for speed around the world in 33 countries at least. Things should be reconsidered, according to them – for example, why does a smartphone automatically assume that a WiFi network is faster than the mobile data connection?

There are so many situations where WiFi speed is much worse than mobile data. And it pretty much has to do with stumbling upon a bad (slow, non functional) WiFi hotspot to which your smartphone sticks – a.k.a. sticky WiFi.

WiFi vs Mobile Data Speed: What Smartphone Manufacturers Are Doing

Phone manufacturers are constantly trying to make them smarter when it comes to managing your connectivity. Features like iPhone’s WiFi Assist or Samsung’s Adaptive WiFi try to solve the issue. Unfortunately they don’t – the best they can do is switch between connections when hitting certain transfer or latency thresholds.

But what’s the goal here? Just determining which is faster – WiFi or mobile data – and then using that? Or getting the fastest speed in any given scenario? If you’re interested in the latter one, you need Speedify to combine both WiFi and mobile data at once into a super-connection.

Speedify Solves the WiFi vs Mobile Data Speed Choice: Uses Both for Combined Speed and Reliability and Security

Speedify is a fast bonding VPN app that uses channel bonding technology to combine connections at once. It can bond 2 or more Internet links together at the same time on your computer or mobile device.

Just get Speedify on your device and make sure you enable both WiFi and mobile data on your smartphone. Speedify will use them both, as necessary, to give you the best Internet experience for your needs.

Being powered by VPN technology, Speedify also protects your private data from hackers and snoops. Everything is encrypted using the latest technologies and the service doesn’t collect any personal data about the online activities.

What are you waiting for? Don’t choose between WiFi and cellular data when it comes to speed. Use them both for their combined speed! Get Speedify today!