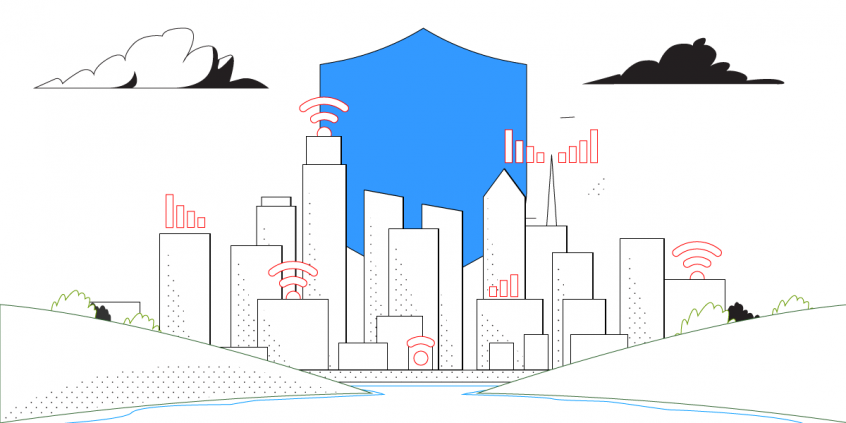 Why You Need a VPN for Public WiFi

Nowadays it’s almost impossible to find a spot within the city or even in the suburbs that doesn’t have a public WiFi hotspot you can connect to. Every airport, café, and library has a public WiFi network, but using them is trickier than it looks. Something as simple as checking your email could lead to you getting your identity stolen, or even compromising your company sensitive data, if you’re a remote worker.

Since 99% of the public WiFi hotspots’ security protection is a joke, you need to act on that yourself and use a VPN for public WiFi!

Is the Public WiFi Network You’re Using to Access the Internet Safe Enough? Can You Bet Your Online Identity on It?

The truth is, your security is not their priority. Public WiFi networks are attractive targets for hackers because they are usually easy to compromise and so many different people use them that they never run out of new targets.

Unfortunately, public WiFi networks aren’t just convenient for you; they are also convenient for criminals, who can very easily snoop in on the traffic and get all your social media accounts, credit card numbers, email passwords, etc.

Fact: a VPN for Public WiFi Encrypts Traffic so Nobody Can Spy While It’s Running

The two primary solutions to the public WiFi security issue are to either not use them at all, or to use a VPN to protect your online data. When you are traveling to work or pleasure, it is almost impossible to avoid using a public WiFi network. They are part of the essential infrastructure.

So, it’s definitely not a myth: if you want to protect yourself when accessing the Internet from public WiFi networks, you need to use a VPN.

Fact: Most Standard VPNs Slow You Down and Leave You Exposed When Internet Drops

One of the issues of standard VPNs for public WiFi is that although they do a good job of giving you a basic level of security, they slow down your web browsing, and can make the internet almost unusable because of the way they’re built.

Speedify is different and solves both issues described above: speed, security and reliability. Speedify was built from the ground up for speed. It is more than just a VPN. It is an industry leading bonding VPN service that can also increase your bandwidth by utilizing all available Internet connections simultaneously. When you use Speedify, you are getting state-of-the-art encryption, without having to sacrifice the speed of your internet connection.

Speedify is available on all the major platforms. You can download it for your PC, Mac, IOS device, or your Android device.

Speedify doesn’t require any technical skills or knowledge to use or setup. In just a few minutes, you are ready to browse the Internet securely, without having to sacrifice speed.

The next time you are away from home, protect yourself by using Speedify VPN for public WiFi. You will be able to enjoy using public networks for work or fun, without having to worry that you are putting your data at risk. Use Speedify as your VPN service for public WiFi!