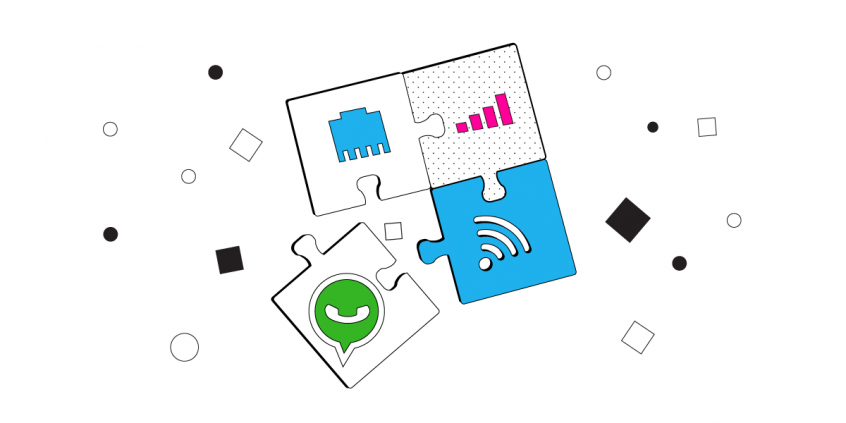 Have a Problem with WhatsApp Calls Not Working?

WhatsApp is a great app text and VoIP calls.  A great plus is that we avoid costly mobile phone roaming charges while contacting friends and family abroad.

But sometimes when you’re on a WhatsApp call, it suddenly says “Call on Hold” and doesn’t work anymore. This can happen after a few seconds or in the middle of the conversation without prior warning – all you can hear are those beeps, and then… silence.

The simplest way to avoid such issues with WhatsApp calls not working is to have a fast and reliable Internet connection, wherever you are. Watch the video and read below to see how to get that!

Why Can’t I Make or Receive WhatsApp Calls on My Smartphone?

The short answer: because you’re probably on a poor Wi-Fi network or out of cellular data coverage. But if we were to troubleshoot this objectively, your WhatsApp calls are not working because of:

But, like mentioned before, most probably it’s your Internet! WhatsApp calls require a good amount of bandwidth from your Internet connection to work properly.

Here are some solutions to get WhatsApp calls working again:

When your Internet connection is too slow, you don’t have enough bandwidth for a VoIP HD audio call. Also, if the connection is flaky, you may be experiencing excessive packet loss. What’s worse, is that both of these issues are often amplified when you are on the move. Mobile devices can not seamlessly transition between different Wi-Fi networks or cell towers. When this happens, it will interrupt apps and drop Internet VoIP calls, such as the ones on WhatsApp.

WhatsApp Calls Not Working? Get Faster and More Reliable Internet with Speedify

By default, mobile devices are designed to only use one Internet connection at a time – Wi-Fi or cellular data. This happens even though both connections are active. What if you could use BOTH connections at once, for their combined speed and reliability?

Speedify is a channel bonding service that changes the way your mobile device connects to the Internet. It is the only VPN on the market for combining multiple Internet connections at the same time. Instead of just using one connection at a time, Speedify allows your smartphone or tablet to connect to the Internet over both Wi-Fi and mobile data simultaneously. This instantly increases your connection bandwidth and reliability and provides a better and uninterrupted VoIP call experience. You won’t see any WhatsApp calls not working issues.

Speedify also monitors the quality of your Internet connections with its automatic failover protection capabilities. When it detects that a signal is weak or that the network is too slow, it will automatically and seamlessly reroute the data through the other working connection. Best of all, when the other connection is back online and reliable, it begins using it again – automatically and in the background. Say goodbye to frequent WhatsApp freezing!

The app is also smart enough to try and send as much data as possible through Wi-Fi instead of over more expensive mobile data connections – saving you from potential overage fees from your carrier!

In addition to delivering a faster Internet experience to your mobile device, Speedify uses advanced technology to quickly encrypt all the data sent to and from your device. Speedify keeps you safe from compromised Wi-Fi networks, snooping ISPs, and other threats.

You need to make sure WhatsApp calls work whenever you need them to work. That means having a fast and stable Internet connection. Hence, get started with Speedify as soon as possible!