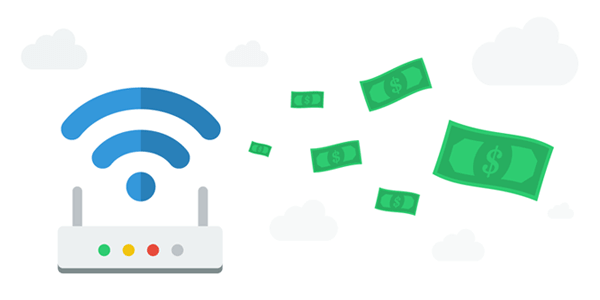 Networking 101: What Does a Router Do?

We all have them in our homes, whether we refer to them as routers or residential gateways: that box with LEDs and antennas for Wi-Fi. So what is a router and how does it work?

The official definition of a router is a networking device that forwards data packets between computer networks, performing traffic directing functions and pushing data towards its destination. Simply put, a router is a network hardware device that links two networks together - usually a local area network with the Internet. In the context of home usage, routers are also called residential gateways.

A router / residential gateway has a few specific roles and comes with some benefits:

Want to find out more about how a router works, types of routers, the difference between a modem and a router, and how to get the fastest and most reliable Internet connection from a router? It’s all in this article - enjoy reading it!

How a Router Works

What happens in your router when you’re watching the latest episode of your favorite TV series on Netflix? Let’s find out!

As mentioned above, routers guide and direct network packets between networks, including the Internet, which is made up of multiple networks that are interconnected to each other.

Each network packet has a header, which provides information about the packet’s contents, origin and destination. This is where the router comes in - it reads the network packet header and transfers each one according to the instructions in the header. The router decides where to route the packet based on the information in its routing tables, which often specify a default route that the router uses whenever it fails to find a better forwarding option for a given packet.

You can imagine that not all network packets are safe - some originate from hackers. That’s why modern routers include functions that protect the local users connecting to the Internet from cyber attacks like distributed denial-of-service (DDoS) or various vulnerability exploits.

From the security perspective, a router is an important defense mechanism for the devices you connect to the Internet. In the case of home Internet / residential gateways, the IP address assigned to you by your ISP is public. When you’re using a router, it isolates the local IP addresses of your computer, smartphone, TV, etc. from the Internet, making them private. At the same time, the router knows exactly where to transfer data within the internal network, even though multiple devices on your local network have the same public IP address. This is done using network address translation (NAT) mechanisms.

Modem vs Router - What Is the Difference?

Now that we’ve seen what a router does, what about modems - what do they do? A modem is a networking hardware device that converts digital data used by your computer, smartphone, tablet, etc. into a format that can be transmitted over the Internet infrastructure used by your Internet service provider (ISP).

Most of us will associate modems with those squeaky sounds made by modems in the 80s, 90s and early 2000s when dialing to your ISP using the phone line. But now things have changed. Modern modems are standalone boxes that are quiet.

For example, if you have cable Internet at home, you may have a modem in which you plug in the coaxial cable from your ISP and get an Ethernet cable (RJ-45 type) as an output, which you can then plug into your router or directly into a computer. Same story for DSL Internet - you usually plug in a phone line cable (RJ-11 type) and get the network cable output as well. If you have optical fiber to your premises, you may plug in the fiber optic cable into a modem which - guess what - outputs to the same Ethernet cable.

Most ISP nowadays provide you with at least a modem to your home. Some provide a Wi-Fi router that includes a modem inside, so you have only one box between the Internet and your devices.

To sum it up: a router moves traffic between two networks, a modem connects a network to the Internet. Modern routers have modems included. You need both devices, integrated or not, to access the Internet on all devices from your home.

Routers are classified by the position in a network environment and the implementation type. Here are the main types, as mentioned by most equipment manufacturers:

These are generally used by ISPs (Comcast, AT&T, Verizon, etc.) or cloud providers (Google, Microsoft, Amazon) to route data packets at the core of their infrastructure setup, within a single network, not multiple ones. Core routers provide maximum bandwidth in order to connect additional routers or switches. They handle traffic coming from other routers along the main backbones of the Internet, doing the heavy lifting of data transfer.

As the name suggests, they are used to connect an organization network with external networks such as the Internet. They are optimized for bandwidth, typically having only wired Ethernet ports. In the case of ISPs, these routers are the ones installed locally to cover a certain amount of households / connected clients. The data sent by your home modem / router goes through this type of routers on its way to the destination.

These are the routers your ISP provides you with when you subscribe to a plan. And the ones you buy yourself, for better performance. These allow you to connect multiple devices via Ethernet and/or Wi-Fi. They usually include the modem inside, as they connect directly to the Internet through the ISP’s infrastructure of edge and core routers. Wi-Fi routers, mesh routers, portable travel routers (jetpacks, Mi-Fi devices) - these are all examples of wireless routers.

Not all routers have to be hardware devices. A virtual router is a piece of software that allows some router functions to be delivered as a service in the cloud or on a host hardware device. They are usually used by large businesses with complex network needs, but can easily be used by ordinary users through software like Connectify Hotspot. Your smartphone while sharing a personal hotspot can also be considered a virtual router.

The Anatomy of a Wireless Router / Residential Gateway

A router is like a mini computer that is specialized in doing network tasks. It’s got an internal processor, memory, input and output ports, as well as software that controls it.

First of all, it has to have one or more ways to connect to the Internet. Most of them have a wide area network (WAN) port where you connect your ISP’s cable. Depending on the infrastructure, this can be an Ethernet port (typically), a coaxial cable port, a phone line port, a fiber optic port or a cellular SIM port. Some routers intended for home use have a second WAN port, which can be used to connect a second ISP. This comes in the form of a USB port where you can connect a cellular or Wi-Fi dongle, or a cellular SIM port. In this case, the router can use the second connection, if present, as a backup or to load balance network traffic between them.

And then, there’s the router software, which is the bread and butter of the router’s performance. Most off-the-shelves routers come with proprietary firmware from the equipment manufacturer. But there are also open source firmwares for compatible routers, such as DD-WRT, OpenWRT and others. These provide much more control over the capabilities of the router.

One thing worth noting here: in the last few years, we’ve all seen a new generation of wireless routers come to the market. And we’re not referring to the Wi-Fi routers accepting the latest standards, but we’re talking about mesh routers. These come with additional interconnected “satellite” devices that offer multiple sources of Wi-Fi signal, all on the same seamless network.

7 Tips to Get the Best Internet Connection from Your Router

How should you choose a router / residential gateway for your home? What to look for? How to get the best connectivity in terms of speed and reliability from your router?

Before getting to the tips, as a general rule, you should make sure the router you intend to use is compatible with your ISP’s requirements, both hardware and software. If you have two ISPs you wish to use, choose a router with two WAN ports compatible with both ISPs. Assuming all these prerequisites are checked, here are 7 tips to consider for improving your Internet’s performance in terms of speed and stability:

To wrap this up: routers are an essential piece of equipment in our homes, as they are our gateways to the Internet. Knowing how to optimize them in order to get the most out of your Internet connection is crucial with all the bandwidth intensive usage that’s going on nowadays - streaming, gaming, etc.