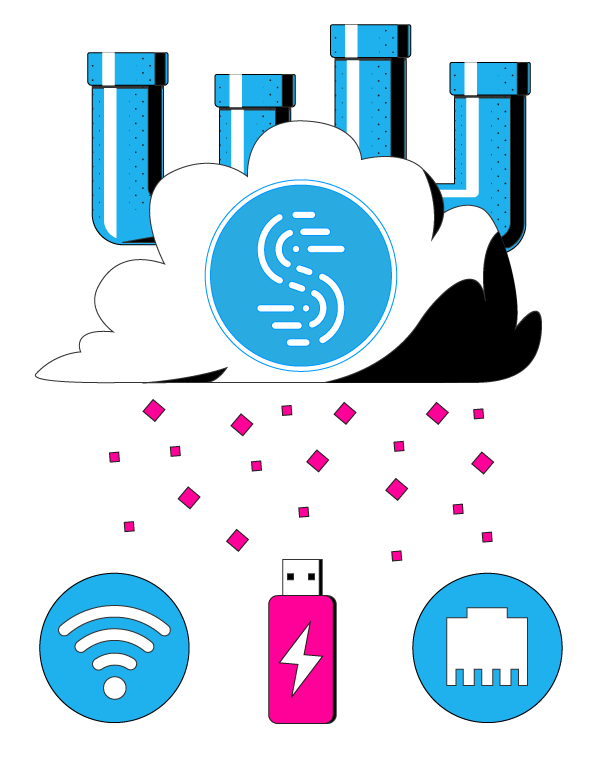 What Is Bandwidth Bonding and How Does It Benefit You?

As you’ve probably landed at this article looking for a bonding router, you are trying to combine 2 or more connections together. In computer networking context, channel bonding / bandwidth bonding / WAN-bonding / link aggregationrefers to combining (bonding) multiple network connections at the same time. This brings two main benefits:

The cheaper hardware alternatives may only do load balancing – see here the difference between broadband bonding and load balancing.

A typical channel bonding implementation is usually associated with expensive hardware devices.  These include dedicated bonding routers and other networking equipment. You’re looking at least at some hundreds of dollars out of your budget. Nowadays, smart channel bonding software apps do exactly the same thing as a bonding router, only for a fraction of the price.

One such example is Speedify – the secure bonding router software app! It works on Android, iOS, Windows and macOS devices, with no need for dedicated hardware!
Speedify is a faster mobile alternative to traditional broadband bonding routers from companies such as Mushroom Networks Peplink, Viprinet and others. Find out more below!

Speedify was launched in 2014 as a channel bonding service. It is still the only software-only broadband bonding solution available for the general public. Its link aggregation technology is more than just the standard 802.3ad or 802.1ax implementations. Here’s what it brings more of, when compared to link aggregation routers:

When running on your computer or mobile device, Speedify identifies all available Internet connections in real time. You can add or eliminate them while running – Speedify will get that and adjust its link aggregation algorithms. It “routes” all of them into a virtual network adapter.

The Speedify app establishes a secure and encrypted connection to a speed server in the cloud. That  acts as a middleman between you and the rest of the Internet. The server can be either public or a dedicated one.

Speedify works in tandem with the speed servers in the cloud. They intelligently divide your Internet traffic and deliver the combined speed of all available Internet connections.

As Speedify was built with the core ability to combine 2 or more Internet connections at once, the focus has always been on:

In terms of bonding efficiency, you can get as high as 95% according to our latest tests. This number depends on the connection types and speeds:

For example – see below a recent video where we combined 10 Internet connections at once.

Here’s an example of how we calculate the Speedify bonding efficiency:

Looking for a Broadband Bonding Router? Take the Software Route – Get Speedify

Test Speedify on your computer or smartphone. Don’t spend thousands when you can spend a fraction of that and always be up to date with the technology!