What Is Starlink? What You Have to Know

There are very few people in today's world who haven't heard of Elon Musk. One of the charismatic entrepreneur's companies is called Starlink - a division of his SpaceX enterprise. The goal of Starlink is to create a constellation of low orbiting satellites to cover the Earth and provide Internet services. So, in a nutshell, you could say that Starlink is a satellite Internet system.

Starlink's aim is to sell high-speed, low latency broadband Internet access to those who need it. This includes, but is not limited to:

Being a satellite Internet service provider, Starlink is technically similar to others such as HughesNet or Viasat. In order to get access to the Internet, you have to buy and set up a small satellite dish at your home. The satellite signal gets passed to the router (included in the setup kit) to which you will connect your devices: computers, smartphones, tablets, etc. 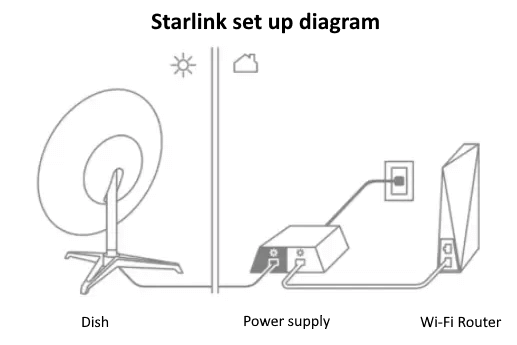 Starlink is currently available to a limited number of users per coverage area at this time. It has been rolled out in several regions around the world, including North America, Europe and Australia.

The satellite Internet system being rolled out by Starlink is comprised of three main elements:

The data being sent and received over the Internet by Starlink users goes through all these elements. The goal is to have a connection with the lowest possible latency and the highest available bandwidth. So - the more satellites deployed in the constellation, the better, as they will be able to communicate directly between them as an alternative to using the ground stations.

If you're interested in seeing the coverage by Starlink satellites (not the actual Internet service provided!), check out https://satellitemap.space/ or https://orbitalindex.com/feature/starlink-coverage/.

At the moment, Starlink Internet service is used by more than 10,000 beta testers and is available to order or preorder in parts of the following countries:

What are some Internet speeds you can expect when using the Starlink service? According to the official website, "during beta, users can expect to see data speeds vary from 50 Mbps to 150 Mbps and latency from 20 ms to 40 ms in most locations over the next several months as we enhance the Starlink system." But it's not only the Internet speed that's important - reliability is key as well. And they do state that "there will also be brief periods of no connectivity at all."

Current Starlink speeds and latencies: users on Reddit reported speeds of up to 333 Mbps download, 38 Mbps upload with 27 ms latency.

Expected speeds and latencies according to SpaceX, via AndroidAuthority: 1 Gbps download, 25-35 ms latency.

As suggested, data speed, latency and uptime will improve once more satellites and ground stations will be added to the system.

When Will Starlink Launch and What's the Cost?

There is no official set date for a Starlink launch in any territory as of March 2021. But following coverage focus for territories, the first areas to see the launch will probably be the USA and Canada. You can stay up to date with the latest news by following SpaceX on Twitter.

The cost, however, is available. The service costs $99 per month, plus taxes and fees. You also have to put down an initial payment of $499 for the mountable satellite dish and router that you'll need to install at home.

In terms of deliveries, Starlink claims it's taking orders from customers on a first-come, first-served basis. They're also saying some preorders could take as long as six months to fulfill.

Is Starlink the Right Choice for Me? Can I Live Stream or Play Online Games?

If you live in a city or suburb, it's probably not. And that's because you most likely have faster and more cost effective alternatives, starting from cable to fiber optic connections.

But if you're in a remote area with poor coverage from broadband Internet, then you should definitely consider Starlink. You should also take into account Starlink if you're a digital nomad, always on the move, RV-ing around the country.

And don't worry about bandwidth intensive and latency sensitive activities, such as live streaming or gaming. There are plenty of users doing that while running on Starlink Internet. Here's just an example:

Of course, you should consider also the possibility of a Starlink Internet outage, as mentioned specifically on their website. So, if you get into such activities, be prepared - read below.

Why Could Things Go Wrong with Starlink? How to Solve Internet Issues

It's always a good idea to have a second connection available, in case you have any Starlink connection issues. This can be the cellular data on your smartphone or external USB dongle, a nearby public Wi-Fi connection or any type of connection you might have around.

The problem with using a backup connection is that you'll break your current session. Even if you keep the second connection active on your computer or smartphone, that device will not use both Starlink and the backup connection together at once. If you're doing a bandwidth intensive latency sensitive activity such as live streaming video or gaming, you can kiss that session goodbye. You'll have to reconnect using your backup Internet. And then, when Starlink is working, reconnect to it again.

We've got a solution for this too: using a link aggregation / channel bonding VPN like Speedify.

Conclusion: Use Starlink If Better than Your Current ISP, with Backup Connection for Protection

As mentioned earlier, Starlink is a great solution for those in remote and rural areas. As the deployment of all their 12,000 satellites into orbit advances, the speed, latency and reliability of the system will greatly improve.

But until then - and even after, given there might be network congestion issues in certain areas - it's best you have a secondary backup connection hooked up. This can be your tethered phone or even a cheap DSL / cable connection, if you get any of those. It will save you from those unwanted moments when your main Starlink Internet will be slow or unreliable.

Using Speedify to combine your Starlink Internet with a secondary / backup connection is the best idea for fast, uninterrupted Internet. Here's how it works: