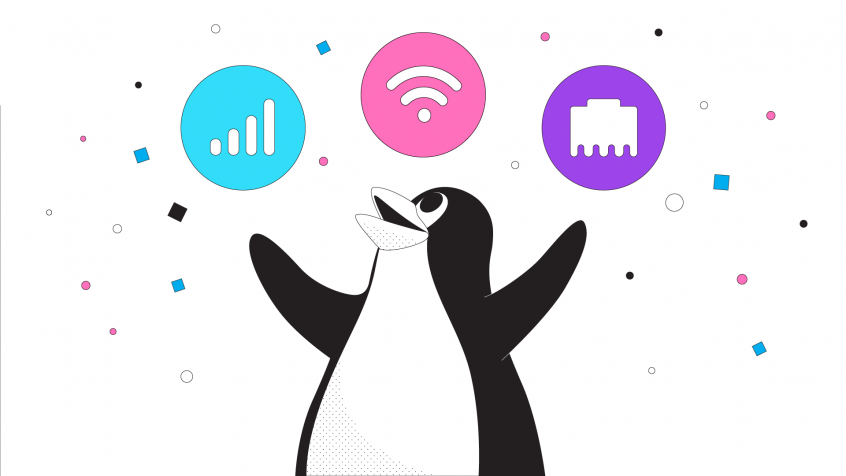 Linux Bonding Made Easy with Speedify

Two connections are better than one – the more, the merrier, for that matter. And we don’t mean switching between them, but using them simultaneously, to maintain the current session. This comes in handy whenever you need a stable and fast Internet connection. Examples include live streaming, online gaming, traveling, day trading, or reporting from the field.

While you can easily combine multiple connections directly on your computer or mobile device, many people prefer using dedicated hardware for this. Depending on the purpose and location, hardware network bonding equipment ranges from a small box to a whole system rack. And of course, the prices are proportional, starting at several hundreds of dollars.

However, now there is also software you can use to turn a Linux machine running a Debian based Linux distribution like Raspberry Pi OS or Ubuntu into a network bonding router. In this article we’ll see how you can easily do Linux network bonding using Speedify bonding VPN, now available at version 8!

What Is Network Bonding?

The network bonding term refers to methods of using multiple Internet connections simultaneously to increase the throughput capacity beyond what a single connection can sustain. Another important benefit is getting a reliable connection. If one of the connections should go bad or disconnect, the overall bonded Internet will stay online thanks to the other connections that are still working.

With Linux network bonding you can theoretically combine any type of connections. If you want to set this up manually, you have to follow some steps:

Why Speedify for Linux is the Best Network Bonding Software

Speedify is an established brand when it comes to bonding network connections together on computers and mobile devices with over 1 million active users worldwide. It’s been available for Windows, macOS, Android, and iOS since 2014, and now with version 8, it’s officially available for Linux (Ubuntu and Raspberry Pi OS) as well!

Speedify for Linux runs on Ubuntu and Raspberry Pi OS but is likely compatible with other Debian-based Linux distros. It has both a full user interface, but also a command-line interface. Plus, it’s accompanied by a Python API (available on GitHub) to allow full control and interaction between other programs, scripts and Speedify.

It’s the perfect tool for:

Anyone doing mission critical tasks like live streaming as a reporter, vlogger, online gamer, or doing a business online. Using Linux for your Internet bonding and sharing gives you rock solid reliability for your Internet.

4 Steps to Do Linux Network Bonding with Speedify

It’s very easy to combine 2 or more Internet connections on your Linux machine or Raspberry Pi using Speedify for Linux.

Here are the steps you need to take:

Speedify for Linux: Share the Bonded VPN Connection to Your Other Devices via Wi-Fi or Ethernet

One of the strengths of using a Linux machine (including Raspberry Pi) is its native ability to act as a router. So, Speedify on Linux includes scripts to share the bonded VPN connection over either Ethernet or Wi-Fi.

To configure Speedify as a Hotspot, please follow the instructions in our knowledge base. There’s also a video available on the Speedify YouTube channel.

To configure Speedify as a wired Ethernet router, see the steps you need to take here.

Speedify for Linux: Talk to It from Your Own Program or Script

Speedify 8 also introduces a brand new Python API available on GitHub. This enables you to control Speedify programmatically on Linux.

Do you have a device running Ubuntu or Raspberry Pi OS that is capable of connecting to multiple Internet connections? Are you enjoying the latest Raspberry Pi 4? Then it’s time you get Speedify for Linux and get better Internet for you and your other devices.